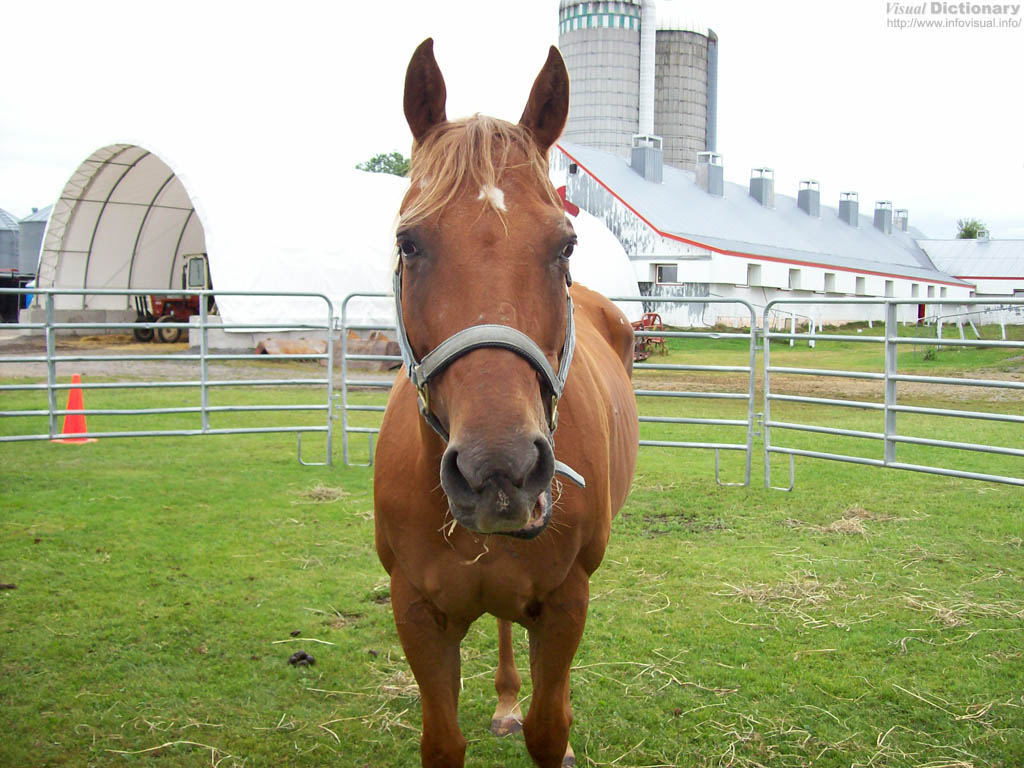 The horse is a hoofed mammal, one of eight living species of the family Equidae. The horse has evolved over the past 45 to 55 million years from a small multi-toed creature into the large, single-toed herbivore of today. Humans began to domesticate horses around 4500 BC, and their domestication is believed to have been widespread by 3000 BC; by 2000 BC the use of domesticated horses had spread throughout the Eurasian continent. Although most horses today are domesticated, there are still endangered populations of the Przewalski's Horse, the only remaining true wild horse, as well as more common feral horses which live in the wild but are descended from domesticated ancestors.

There is an extensive, specialized vocabulary used to describe equine-related concepts, covering everything from anatomy to life stages, size, colors, markings, breeds, locomotion, and behavior. Horses are anatomically designed to use speed to escape predators, and have a well-developed sense of balance and a strong fight-or-flight instinct. Related to this need to flee from predators in the wild is an unusual trait: horses are able to sleep both standing up and laying down. Female horses, called mares, carry their young for approximately 11 months, and a young horse, called a foal, can stand and run shortly following birth. Most horses begin training under saddle or in harness between the ages of two and four. They reach full adult development by age five, and have an average lifespan of between 25 and 30 years.

Horses and humans interact in many ways, not only in a wide variety of sport competitions and non-competitive recreational pursuits, but also in working activities including police work, agriculture, entertainment, assisted learning and therapy. Horses were historically used in warfare. A wide variety of riding and driving techniques have been developed, using many different styles of equipment and methods of control. Many products are derived from horses, including meat, milk, hide, hair, bone, and pharmaceuticals extracted from the urine of pregnant mares. Humans provide domesticated horses with food, water and shelter, as well as attention from specialists such as veterinarians and farriers.

Horse breeds are loosely divided into three categories based on general temperament: spirited "hot bloods" with speed and endurance; "cold bloods," such as draft horses and some ponies, suitable for slow, heavy work; and "warmbloods," developed from crosses between hot bloods and cold bloods, often focusing on creating breeds for specific riding purposes, particularly in Europe. There are over 300 breeds of horses in the world today, developed for many different uses.

The English-speaking world measures the height of horses in hands, abbreviated "h" or "hh," for "hands high," measured at the highest point of an animal's withers, where the neck meets the back, chosen as a stable point of the anatomy, unlike the head or neck, which move up and down. One hand is 4 inches (10 cm). Intermediate heights are defined by hands and inches, rounding to the lower measurement in hands, followed by a decimal point and the number of additional inches between 1 and 3. Thus a horse described as "15.2 h," is 15 hands, 2 inches, or 62 inches (160 cm) in height. The size of horses varies by breed, but can also be influenced by nutrition. The general rule for cutoff in height between what is considered a horse and a pony at maturity is 14.2 hands (58 inches (150 cm)). An animal 14.2h or over is usually considered a horse and one less than 14.2h as a pony. However, there are exceptions to the general rule. Some breeds which typically produce individuals both under and over 14.2h are considered "horses" regardless of height. Conversely, some pony breeds may have features in common with horses, and individual animals may occasionally mature at over 14.2h, but are still considered to be ponies.

The difference between a horse and pony is not simply a height difference, but includes other aspects of phenotype or appearance. There are noticeable differences in conformation and temperament. Ponies often exhibit thicker manes, tails and overall coat. They also have proportionally shorter legs, wider barrels, heavier bone, shorter and thicker necks, and short heads with broad foreheads. They often have calmer temperaments than horses and also a high level of equine intelligence that may or may not be used to cooperate with human handlers. In fact, small size, by itself, is sometimes not a factor at all. While the Shetland pony stands on average 10 hands high (40 inches (100 cm)), the Falabella and other miniature horses, which can be no taller than 30 inches (76 cm), the size of a medium-sized dog, are classified by their respective registries as very small horses rather than as ponies.

Horses exhibit a diverse array of coat colors and distinctive markings, described with a specialized vocabulary. Often, a horse is classified first by its coat color, before breed or sex. Flashy or unusual colors are sometimes very popular, as are horses with particularly attractive markings. Horses of the same color may be distinguished from one another by their markings. The genetics that create many horse coat colors have been identified, although research continues on specific genes and mutations that result in specific color traits. Essentially, all horse colors begin with a genetic base of "red" (chestnut) or "black," with the addition of alleles for spotting, graying, suppression or dilution of color, or other effects acting upon the base colors to create the dozens of possible coat colors found in horses. Horses which are light in color are often misnamed as being "white" horses. A horse that looks pure white is, in most cases, actually a middle-aged or older gray. Grays have black skin underneath their white hair coat (with the exception of small amounts of pink skin under white markings). The only horses properly called white are those with pink skin under a white hair coat, a fairly rare occurrence. There are no truly albino horses, with pink skin and red eyes, as albinism is a lethal condition in horses.

Pregnancy lasts for approximately 335–340 days and usually results in one foal. Twins are very rare. Colts are carried on average about 4 days longer than fillies. Horses are a precocial species, and foals are capable of standing and running within a short time following birth. Horses, particularly colts, may sometimes be physically capable of reproduction at about 18 months. In practice, individuals are rarely allowed to breed before the age of three, especially females. Horses four years old are considered mature, although the skeleton normally continues to develop until the age of six; the precise time of completion of development also depends on the horse's size, breed, gender, and the quality of care provided by its owner. Also, if the horse is larger, its bones are larger; therefore, not only do the bones take longer to actually form bone tissue, but the epiphyseal plates are also larger and take longer to convert from cartilage to bone. These plates convert after the other parts of the bones, but are crucial to development. Depending on maturity, breed, and the tasks expected, young horses are usually put under saddle and trained to be ridden between the ages of two and four. Although Thoroughbred race horses are put on the track at as young as two years old in some countries, horses specifically bred for sports such as dressage are generally not entered into top-level competition until they are a minimum of four years old, because their bones and muscles are not solidly developed, nor is their advanced training complete. For endurance riding competition, horses are not deemed mature enough to compete until they are a full 60 calendar months (5 years) old